Investigation of FeS2 Nanoparticles for Use in Optoelectronic and Thermoelectric Applications

Iron pyrite (FeS2) is the most abundant sulfide material on earth. This material has been widely investigated by researchers because of its optical properties. However, it has been difficult to produce High efficiency FeS2 based solar cells. This is due to many different impurities that arise when making the materials. The ability to synthesize pure pyrite FeS2 material is therefore critical for applications.

Pure Iron pyrite nanocrystals were synthesized using hot injection by mixing sulfur with an iron precursor in the presence of an amine. To improve the stability, shorter ligands replaced the native amines ligands. The stability of the iron pyrite after ligand exchange was investigated by looking at the changes in the properties of films deposited by spray pyrolysis before and after being stored in air and at room temperature for one year. Even when being deposited at high temperature, the pyrite films were not sulfur deficient. Quenching the PL emission of the nanocrystals and increasing their dark current was observed after ligand exchange. This was detrimental for the solar cells.

The use of FeS2 for thermoelectrics was investigated because of its metal like conductivity. The nanoparticles were once again synthesized and the native ligands replaced. The nanoparticles were dried to make a powder and pressed to make pellets. Their thermoelectric properties were measured. The seebeck coefficient of the pellets showed a p-type conductivity and the highest value of the ZT in the 10-3. To increase the ZT, the nanocrystals were doped for the first time with cobalt using a two-step hot injection method.. The thermoelectric properties of the doped nanoparticles were measured. The ZT showed an increase of 2 order of magnitude, the highest reported ZT from iron pyrite. 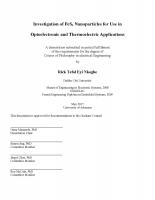 This work is licensed under a Creative Commons Attribution-NonCommercial 4.0 International License.

Details about this monograph